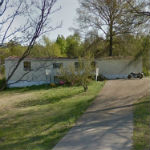 ROCK HILL, S.C. – A one-year-old is in the custody of the Department of Social Services after investigators say the young child was found inside a home with a meth lab.

The York County Multijurisdictional Drug Enforcement Unit busted the lab along the 2700-block of Lesslie Dale Road in Rock Hill on Tuesday afternoon.

Investigators say they were out at the trailer around 1:30 p.m. after getting complaints that someone was making methamphetamine at the home.

Officers reported found precursors for manufacturing methamphetamine along with bottles, tubes, and other meth making materials.

Investigators say they also recovered 295 grams of liquid methamphetamine. That is about 10.5 ounces.

Officers say three adults were found inside the home with the toddler. The Haz-Mat Crew was called out to collect the chemicals.

The child’s mother, 19-year-old Kaeley Ayn Jenkins, was charged with unlawful conduct towards a child and exposing a child to methamphetamine.

Investigators say all four lived inside the home.

Richard Dean Bailey Jr was charged in that case.

Officials say this is the 13th meth lab busted in York County in 2014.