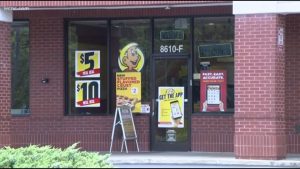 Police are investigating after a teenager was robbed at gunpoint in Ballantyne on Sunday evening.

The incident happened in broad daylight in a parking lot near the Hungry Howie’s pizza restaurant at the Camfield Corner Shopping Center. Police responded to the area at around 6:00 p.m. after a 19-year-old employee of the pizza establishment was approached by two suspects with guns.

Police said the two suspects robbed him at gunpoint, but were only able to get away with car keys. The teenager was not hurt in the incident.

Community members are disturbed by the the robbery which happened in an area and a time of day that would ordinarily be deemed safe. The brazen act is being thoroughly investigated by police, but no arrests have been made in the case.