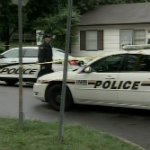 Timothy Crumitie and Sharon Cook Crumitie were husband and wife, according to police.

Officers said the Crumities live in the Gibson Drive house. They said Timothy Crumitie told them that he and his wife were in the garage when they were shot by an unknown assailant.  He said he struggled with the man after being shot and was able to take control of the weapon and shoot him.  Crumitie then called 911 at about 3:15 p.m. Tuesday.

Timothy Crumitie was treated at the hospital for his injuries and released.

Police are investigating to determine any connection between Blanks and the Crumities that existed prior to Tuesday’s incident.