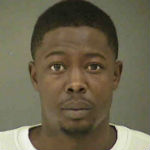 CHARLOTTE, N.C. – A man accused of shooting a 10-year-old girl and two police officers in north Charlotte Sunday afternoon has been transferred to the Mecklenburg County jail and faces 21 charges in the incident.

Twenty-seven-year-old Brandon Jamorris Brewer was arrested around 4 p.m. Sunday and was questioned about the shootings until he was transferred to jail around 5:30 a.m. Monday morning.

According to investigators, officers Kevin Stafford and Eric Bojaj were injured when they were shot along the 400-block of Kingville Drive on Sunday afternoon.

Officers were initially called to Kingville Drive around 2 p.m. Sunday afternoon to the report of a domestic incident. A woman called 911 and advised that her boyfriend tried to attack her.

When they arrived, the officers could not find the woman who called police.

Around 3:24 pm, officers got a call from the same address saying that a man left a home there firing a shotgun into the neighborhood.

One officer was hit by shotgun pellets in his left arm. The other officer suffered a couple of bird shots to the face and elbow.

Both were taken to the hospital to be treated for their injuries.

Officers say a 10-year-old girl was also injured when the shooter, later identified as Brewer, went to the home looking for the woman that lived there. He reportedly shot the girl in the face.

The girl was rushed to the hospital and is listed in good condition.

Members of Charlotte’s SWAT team were called to the scene for a short time. SWAT Team negotiators were able to convince Brewer to surrender to the SWAT Team and was taken into custody around 4 p.m.

CMPD officials say no officers fired any shots in the incident.

Officer Stafford has been a member of the CMPD since August 2011 and Officer Bojaj since January 2010. Both officers are currently assigned to patrol in the North Tryon Division.

Monday morning, Brewer was hit with 21 charges stemming from the shootings.

According to court documents, Brewer has been in trouble with the law in the past in Mecklenburg County.

He was convicted on three counts of armed robbery in 2006 and one count of assault with a deadly weapon from 2005, in Mecklenburg County.

He served around eight and a half years in prison for those crimes and was released in 2012 or 2013, according to records.

He was last arrested in Charlotte in March 2014 for assaulting a female and interfering with 911. Those charges are still pending.

Anyone with information about this incident is asked to call 704-432-TIPS and speak directly to a Homicide Unit Detective.

Detective Fitch is the lead detective assigned to the case. The public can also call Crime Stoppers at 704-334-1600