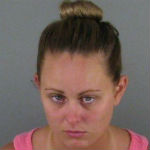 GASTONIA, N.C. – Two young children suffered serious injuries after being hurt in a car wreck involving their mother that was impaired, according to police.

The younger child – a 4-year-old – had to be resuscitated at the hospital and was transferred to Carolinas Medical Center in Charlotte.

Krystal Dawn Nguyen, who turned 27 last week, was jailed under a $550,000 bond on two counts of felony serious injury by vehicle, two counts of negligent child abuse with serious physical injury and driving while impaired.

Nguyen, who has another pending DWI from an incident in Gaston County on May 21, was not injured in the wreck.

The older boy, age 7, was treated and released from CaroMont Regional Medical Center, according to a nursing supervisor.

The wreck occurred around 7:30 p.m. Thursday on the 3100 block of South New Hope Road, near Bethlehem Road, close to Bethlehem Church. Nguyen was driving a 2006 Honda Accord and it does not appear another vehicle was involved in the wreck.

Gastonia Police Officer J.L. Schrock noted that Nguyen had constricted eye pupils and would fall asleep in mid sentence, according to a warrant affidavit.

The official condition of the 4-year-old at Carolinas Medical Center was not immediately available from hospital officials.