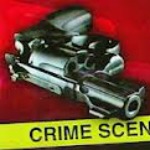 SUMTER, S.C. (AP) — Two Sumter men have been charged with murder and armed robbery in the shooting death of a man in Rembert.

It wasn’t immediately clear whether either of the suspects had an attorney.