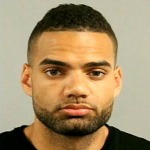 Taylor, 25, was arrested in Michigan by the East Lansing Police Department last month.

According to the police report the alleged victim involved in the assault was dating Taylor.

He was arrested at an area motel where the alleged incident occurred.

The Hornets have removed Jeff Taylor from team activities while police investigate allegations of domestic assault.

The team kicks off the season at 7 p.m. at Time Warner Cable Arena.