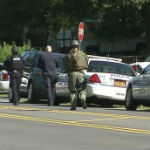 CHARLOTTE, N.C. — Charlotte-Mecklenburg police were involved in a standoff with a man in west Charlotte Monday morning.

CMPD said at 11:20 a.m. the man inside the home died from a self-inflicted gunshot wound.

Officials said that multiple shots had been fired at officers when they first arrived to the home on Parkridge Drive, off of Old Dowd Road, around 8 a.m. Nobody was hit and police did not fire back.

According to police, a man, woman and baby were able to get out of the home unharmed.

Police said residents in the immediate area were evacuated during the nearly three hour standoff.

Officials have not released the man’s name at this time.