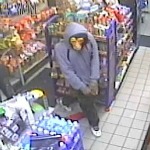 The clerk told police three men entered the store wearing masks, two of the men had handguns. One armed men came around behind the counter and had the clerk open the register while the second armed subject took money from a customer in the store, according to police.

Once the money was removed from the register all three subjects fled from the store on foot.

The suspects was wearing monkey masks, police said. A K-9 was brought in to track the suspects but was unable to locate them.