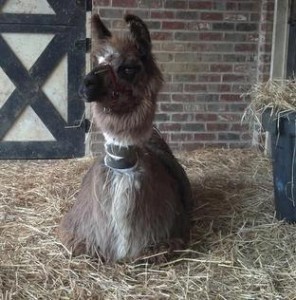 Three man have been arrested and charged in the stabbing, mutilation, and death of a pet llama, Union County police said.

The three men were charged in connection to the mutilation and death of a llama after trespassing onto Borderline Farms, an alpaca and llama farm in Monroe, on South Rocky River Road Wednesday.

President of Borderline Farms Tammy Limer said every one of the animals are her pets, with their own personalities and names. The farm holds half a dozen llamas in order to protect her 60 alpacas that are sheared once a year for fur, Limer said.

The llama who was killed, named Mighty, died protecting her herd, Limer said.

Limer went to check on the farm Wednesday evening and noticed a electrified gate closed that she never closes. Soon after, she found the innards of an animal.

Limer wasn’t sure what the innards were from until she noticed her 10-year-old, 300 pound llama, Mighty, missing.

She found a trail of llama blood and hair the next day that led to the home of one of the suspects, then Limer called authorities.

The body of the llama had been cut completely in half, with one half found in a pond on the farm and the other on a dirt path on Walkup Road, Union County Sheriff’s Capt. J.C. Luke said.

According to Luke, the three men had been drinking and they said they just wanted to know what it was like to kill an animal.

Limer has owned Borderline Farms for five years and said Mighty was one of the breeding llamas. She said she never wants to meet the three men connected to the death of Mighty.

Luke said this is a bizarre case all around. In his almost 23 years of law enforcement, this case was especially disturbing.