4 In Custody After Man Shoots At CMPD Officers 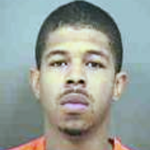 Police conducted a knock and talk Friday morning in the 1800 block of Village Lake Drive. Police say Omar Cook, 25, ran upstairs when they went inside the home. That’s when Cook allegedly fired at officers.

Cook jumped from the second story and fled from the house, according to police. He was taken into custody nearby. A firearm was found on scene. Cook is now charged with two counts of attempted first-degree murder and two counts of assault with a deadly weapon on emergency personnel.

No one was hurt during the incident.