5 Arrested For Heroin Possession Outside Of Rock Hill Store 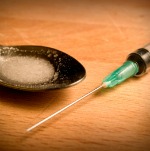 Police said Lucas Shepard admitted they had drugs in the car and that they had all driven to Charlotte to buy heroin.

All five were charged with possession of heroin.