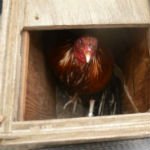 Lee said additional charges are expected against a man considered to be the ringleader of the blood sport.

According to officials from the Carolina Waterfowl Rescue, officers seized 161 chickens that were fighting to the death in two makeshift rings. Of those 161, 14 chickens were already dead when officers arrived.

The surviving 147 chickens are being fed, watered, and given medical attention at an undisclosed location in Chesterfield County.

Officials say the birds will be quarantined for 30 days by the state and will be tested for different diseases before being re-introduced to other chicken populations.