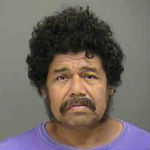 The alleged assault happened Thursday and Vidal-Mentejo was an acquaintance of her family, according to the police report.

The child was injured and had to be treated at a hospital.

Prosecutors charged Vidal-Mentejo with four counts of sex offense and four counts of indecent liberties with a child.  He’s being held in the Mecklenburg County Jail on a $50,000 bond.