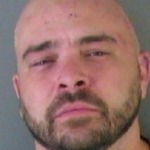 CHERRYVILLE, N.C. —Police ended an eight-hour standoff early Friday morning and arrested the man who had barricaded himself inside a home in Cherryville.

Officers said they went to a Cherryville house Thursday after looking for David Sisk Thursday night because a woman said he broke into her home with a shovel in his hand and he came looking for her.

The victim Stephanie Markowitz told police that she woke up when the shovel hit her in the face.  She said Sisk attacked her after an argument at her Cherryville home two days earlier and had “come back to finish the job”

Police arrested David Sisk, 32, at a house on Hallman Street around 2 a.m. Friday.

Police said Thursday morning Sisk sneaked into her home, cut her phone line and started beating her with the shovel as she slept.

Her friend, Dustin Hoyle, who slept on the couch, heard the attack and ran to help.

He said he fought with Sisk and took a lot of blows with the shovel, too.

Police said they received information Thursday that Fisk, who had several outstanding warrants, was at the house.

Police went to Sisk’s father’s home Thursday night where they had an eight-hour standoff with him.

The warrants included first-degree burglary, assault with a deadly weapon with intent to kill inflicting serious injury, and assault on a female.

According to a release, police said Sisk made numerous threats against the officers, indicated he was armed, and stated he would shoot officers if they tried to arrest him.

Police said Sisk claimed he would shoot the first person who came through the door. He surrendered after they shot tear gas into the house.