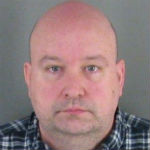 GASTON COUNTY, N.C. – A former Mecklenburg County 911 dispatcher was arrested in Gaston County for having and distributing child pornography.

Police say 44-year-old Christopher Mauldin of Dallas was arrested on March 1, and charged with six counts of felony sexual exploitation of a minor.

The investigation began in November after the SBI and the National Center for Missing and Exploited Children received a tip. Officials say investigators then tracked Mauldin’s movements on the Internet for about four months.

According to the official warrants, Mauldin was in possession of at least eleven photos, which were sexually graphic and involved young boys ranging in age from four to eleven years old.

Detectives say Mauldin’s computer had much more than these eleven photos.

“We could have charged him with more,” said Gaston County Police Sgt. Stephen Dover, “The the district attorney typically uses the more graphic photos to prove our case.”

Mauldin lives in Gaston County but worked in Mecklenburg County as a 911 dispatcher for MEDIC.

His last day on the job was February 27, and he became a former employee on March 7.