Accident On I-485 Sends Pedestrian To Hospital 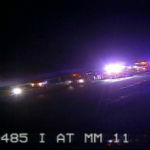 CHARLOTTE, N.C. — A pedestrian was hit on Interstate 485 near Interstate 85 on Friday night, according to Medic officials.

Traffic was at a standstill at 9:30 p.m. N.C. Highway Patrol troopers said it looked like at least four cars were involved in the wreck, but everything was very spread out.

One person was taken to Carolinas Medical Center with life-threatening injuries.

No Charges have been filed at this time.