Altercation Left One Dead, One Injured 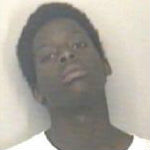 SHELBY, N.C. — Police in Shelby have arrested and charged a 23-year-old after an overnight shooting left a man dead and a woman injured.

Officers said they responded to the shooting call at a home on Crawford Street around 8:45 p.m. Tuesday and when they arrived found 29-year-old Jacques McIntyre suffering from gunshot wounds to the chest.

Both victims were rushed to Cleveland Regional Medical Center, where McIntyre was pronounced dead.

Adams was treated for her injuries and released.

Detectives said there was an altercation at the home involving McIntyre, Adams and 23-year-old Richas Clark. They said Clark left the scene before officers arrived but they were able to find him in Gastonia and brought him back to Shelby, where he was charged with first-degree murder, possession of firearm by felon, and assault with a deadly weapon with intent to kill inflicting serious injury.

Clark was being held in the Cleveland County Detention Center with no bond.