Argument Leads To A Man Killing His Brother 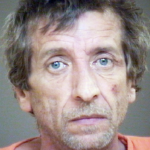 Rickey Anders was shot by his brother in the head.  He was pronounced dead at the scene, according to police.

Jeffery Dwayne Anders is charged with second degree murder and is in the Harven A. Crouse Detention Center under a $750,000 secured bond.

It is the first murder in Lincoln County for 2014.