Arrest Made In Rosecroft Apartment Homicide 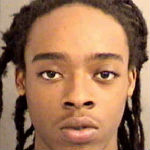 CHARLOTTE, N.C. — One person is dead and one patient was transported to the hospital with life-threatening injuries Thursday night after police responded to a shooting on Rosecroft Drive off W.T. Harris Boulevard near North Sharon Amity Road.

Police said the woman who died was Azjee Rolanda Pierce, 18.  No word on the condition of the other victim.

On Friday, Charlotte-Mecklenburg police arrested Deon McDonald, 19, in the homicide that occurred Thursday night at the Rosecroft apartment complex in east Charlotte.

He will be facing murder charges pending completion of an interview with McDonald, according to police.