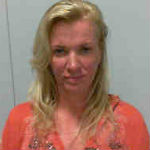 Jacqueline Baines Beems was wanted for allegedly making a harassing phone call, according to the Mecklenburg Sheriff’s Office.

According to the celebrity website TMZ.com, the warrant stems from a series of harassing phone calls Beems allegedly made in October to Flair’s girlfriend, Wendy Barlow Kidder. Kidder recently appeared with Flair on Celebrity Wife Swap.

Flair and Beems were also involved in an altercation at the couple’s SouthPark condo in June 2012, when they were still married.

No one was arrested or taken to the hospital, police said.

Beems also was arrested in February of 2010 for allegedly assaulting Flair during a domestic dispute at the couple’s home in the Stonecroft neighborhood of south Charlotte.