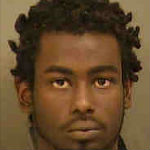 CHARLOTTE, N.C. — The driver of a car that caused a wreck that killed a 4-month-old girl Tuesday was under the influence of alcohol, according to police.

Five people — including the driver, 21-year-old Thabiti Pierre-Louis — injured from the wreck on Old Statesville Road were taken to Carolinas Medical Center.

Police said Pierre-Louis was reckless, speeding and lost control flipping the car that landed on the baby.  The baby was not restrained in a seat and was being held by an occupant in the car.

Pierre-Louis was charged with DWI at the hospital and was booked into the Mecklenburg County jail overnight Tuesday. He faces charges of felony death by motor vehicle, reckless driving, possession of marijuana and child neglect. He is expected to be in court Thursday.

The white Nissan Sentra was headed down Old Statesville Road near W.T. Harris before 3 p.m. Tuesday when police said it ran off the road and crashed into a pole, splitting it in two.

A memorial at the crash site for Londynn continued to grow Wednesday morning.

The crash is still under investigation and witnesses are asked to call police.