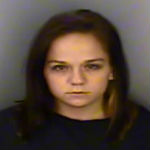 GREENWOOD, S.C. – A Greenwood boy found bruised and alone on a neighbor’s porch told police his mom didn’t want him anymore, according to officers.

Greenwood police said they were called to a home on Third Street after a woman returned home to find a 4-year-old boy sitting on her porch with bruises on his face.

Police said they spoke with the woman and another neighbor who said they had seen the boy around before and he was often unsupervised. They said they had also seen him hit and yelled at a lot.

When police spoke with the boy, he told them that his “momma hit me with a belt,” according to the police report.

The report said officers found bruises on the boy’s face, dry blood coming from his nose and when he lifted up his shirt, he had a large bruise from a belt. Police said the injuries appeared to be a few days old.

According to the report, the woman who found the boy told police when she asked where his mother was, he said, “She don’t want me anymore.”

Police said while they were there, it had been nearly an hour that the boy was not at home but so far, no one had come to check on him. When they went to his home, someone else answered the door and they found the boy’s mother asleep, the report said.

The report said they spoke with the mom, identified as 23-year-old Shelby Briley, and she said she had taken some medicine she was prescribed the night before and she seemed groggy. Police said when they counted her pills, there were several more pills missing than the recommended dose allowed since she received her prescription.

Police said while they spoke with Briley, she never asked about her son’s whereabouts, though they did find adequate food and clothes for him in the home.

Officers arrested and charged her with unlawful conduct toward a child, according to the report. Police said the boy was placed in protective custody with the Department of Social Services.