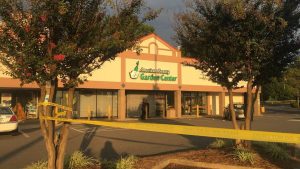 A business owner has been arrested and charged with manslaughter after he shot an intruder in his store on Monday.

Police reported that on Monday night an alarm went off at the store, alerting police and prompting them to send officers to the business. While they were on their way, the owner of the establishment called police and said that he had been alerted to a potential break-in at his business, the American Beauty Garden Center on East Independence Boulevard.

Several minutes later, police received another call from the business owner who told them that he had just shot an intruder.

Police arrived on the scene to find the 20-year-old intruder suffering from a gunshot wound. He was identified as Justin Tyler Anderson. The young man was pronounced dead at the scene.

Police arrested the business owner on the scene who was identified as 49-year-old Alan Brett Corder.

Police released their decision to charge Corder with voluntary manslaughter. The family of Anderson says that they are relieved at the decision because, although what Anderson did was wrong, he did not deserve to die. Family also released that Anderson has a 7-month-old son.