Charlotte Woman Fires at Intruder Who Kicked Through Her Door 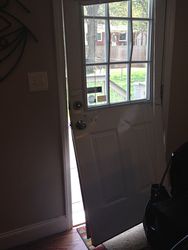 A woman who had a man kick in her Charlotte home’s door Thursday is warning single women to protect themselves.

The woman heard someone banging at the door of her Fieldcrest Road home about 11 a.m. Thursday before the intruder forced himself into her house by kicking through the door.

The woman retrieved her handgun after calling 911, then confronted the man. She asked him why he was trying to break in, then fired six shots into the wall around the man.

The man was Christopher Ervin, 26, who is being charged with burglary.

The woman says that without a weapon, she could have been raped or killed and that she plans to practice at the shooting range, which she encourages of other women.

She will probably not be charged for firing the shots at the man, according to police.