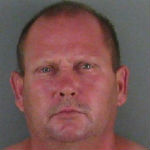 Roger Kale Dorsey of 111 Summit St. remains in Gaston County Jail under a $1 million ond on eight counts of first-degree sex offense against a child and an additional eight counts of indecent liberties with a child. Police charged him Thursday.

The sex offense charges relate to offenses that are alleged to have occurred between May 1, 1991, and May 31, 1993, and involve a boy who was between the ages of 13 and 15 years old at the time.

The indecent liberty charges relate to alleged offenses that occurred between Nov. 1, 1991, and June 30, 1992, and involve a girl who was not yet a teenager, according to warrant affidavits.

Mr. Dorsey is being held in the Gaston County Jail under $1 million dollar bond.