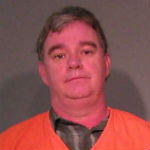 Once he is out of prison, his name will be added to the state’s sex offender registry.

Authorities arrested him in August 2012 after his email address turned up in an investigation.

Butler eventually signed over his computer to investigators.