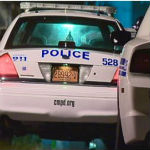 Charlotte-Mecklenburg Police Department conducted its first “Watch for Me NC” operation, which has been set up to help educate both pedestrians and motorists on street and crosswalk laws, on Friday.

CMPD was assisted by the Mecklenburg County Sheriff’s Office in the operation, which was held on Beatties Ford Road.

The first part of the operation happened from 12:45 to 1:45 p.m. and was in the 1500 block of Beatties Ford Road at the crosswalk in front of Northwest School of the Arts. The location is used by students to cross the street before and after school.

A sign indicating “Pedestrian Crosswalk Enforcement” and that drivers must yield to pedestrians in crosswalks was set up while police officers wearing plain clothes used the crosswalk. Other officers were there to pull over violators.

The second half of the operation was conducted in Beatties Ford Road’s 2100 block at La Salle St from 2 p.m. to 2:45 p.m., when West Charlotte High School was letting out. The focus this time was on pedestrians failing to use the crosswalks to get across the road. A total of 50 warning citations were given to pedestrians failing to use crosswalks, many of whom crossed around 15 feet away from where the crosswalk area was located.

Almost half of the 50 citations were for students leaving school who didn’t use the pedestrian refuge designed to help them safely cross.

CMPD officers will be setting up other operations throughout Charlotte to help in educating drivers and pedestrians on the keeping everyone safe.