CMPD Cracks Several Cases When They Nabbed A Purse Snatcher 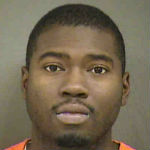 CHARLOTTE, N.C. – Police connected a man accused of grabbing a woman’s wallet from her car to several larceny reports in Charlotte, they say.

Officers responded to a larceny call in the Harris Teeter parking lot on WT Harris Boulevard on Dec. 2.

A woman told police she put her purse in the passenger seat of her car when upon returning to her vehicle after shopping. That’s when the suspect, 22-year-old Nicolaus Gibbs, allegedly opened the passenger door and grabbed the purse off the seat.

The victim said she attempted to grab the purse but the contents spilled. Gibbs was able to grab the wallet and flee, according to police.

Officers used the suspect’s vehicle description to stop him not long after the incident. Police say they recovered the victim’s stole property in his car.

Police say they were able to connect Gibbs to six similar larceny cases. They say he would observe shoppers exit stores and grab their items when they were distracted.