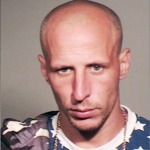 STATESVILLE, N.C. – A man already wanted on separate warrants has been charged with an armed robbery in Statesville.

Police say Joey Eugene Richards, 33, tied up a clerk at the Cricket Wireless on Crossroads Drive.

A worker told police he pulled out a gun and forced him to hand over cash from the register and the store safe. The suspect then duct taped the clerk’s hands and arms and told him to stay in the bathroom, according to police.

The robber got away in the worker’s car, which was found nearby, according to authorities.

Richards was found at a Greyhound bus station in Charlotte. Police arrested him Monday. They said he was armed with an air soft pistol at the time.

Richards admitted to the crime, according to police. He is charged with armed robbery, kidnapping and larceny of a vehicle.

The suspect faces the same charges after a breaking and entering case. That incident happened earlier in November at a gas station on W. Front Street. Police say Richard stole a safe and a Durango.