Deputies Searching For Inmate Who Walked Away From Work Area 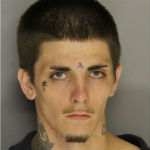 LANCASTER COUNTY, S.C. — An inmate walked away from a work area Tuesday around 2 p.m., according to Lancaster County Sheriff’s Office.

It happened in the area of Old Charles Street and Airport Road in Lancaster County.

Deputies said Anthony Scott Vincent, 22, is serving a 30-day commitment on a bench warrant in the Lancaster County Detention Center.

Vincent’s last known address is S. Jackson Ave, Lancaster. Vincent was last seen wearing a white T-shirt and blue jeans with LCDC printed down the legs of the jeans.

He is described as being about 5 feet 10 inches tall and weighing 145 pounds. He has brown hair and brown eyes.

Vincent has numerous tattoos about his body and a few on his facial area.