Dog Shot in the Leg and Face in West Charlotte 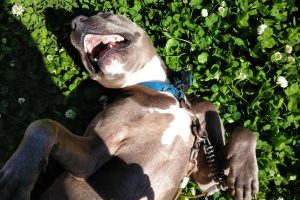 An owner is distressed after her dog was shot in the leg and face this week in northwest Charlotte.

The owner told police that she heard gunshots outside her home. After the shots, she ran outside to see if her dog was okay, and found him with gunshot wounds to his face and leg. The shots had broken the dog’s chain due to the powerful force.

The owner says that she believes the suspects were teenagers. She described one as being around the age of 13 to 15.

In the meantime, the dog survived but has many surgeries and many days of recovery in front of him. The owner has set up a GoFundMe page for help with medical expenses at this link. Police are investigating the incident and say that anyone with information can contact Crime Stoppers at 704-334-1600.