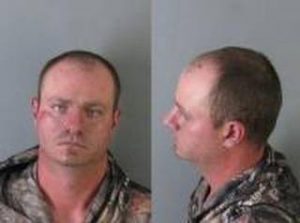 A man set fire to a home on Tuesday in Gaston County after a domestic dispute led to a standoff with police.

Police arrived at the scene in Gaston County in the 100 block of Brindle Street near U.S. 321. Police had been called to the area to aid in a dispute between the suspect and his girlfriend.

The home, which was the residence of the suspect’s girlfriend, was the scene of a standoff after police arrived.

Police reported that the registered sex-offender, 28-year-old Joseph William Rudisill, entered into negotiations with police which seemed, at moments, to be working. However, Rudisill later threatened to burn the house down. The man made good on his threats, setting the house on fire. Rudisill later came out of the house when the flames spread inwards. At this time, police temporary immobilized him using two bean bag rounds (which cause muscle spasms) and took him into custody, ending the standoff.

Rudisill’s girlfriend was able to safely escape the home during the incident. Seroius damage to the home was reported, but no other injuries occurred.

Rudisill was charged with second-degree arson, resisting arrest, domestic criminal trespass, assault with a deadly weapon, and failure to report a new address as a sex offender. He was booked into Gaston County Jail on $500,000 bond.