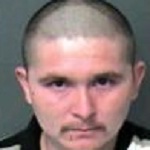 Jorge Herrera, 23, was tried for 1) trafficking in heroin by possession and 2) possession  with intent to sell or deliver heroin. The jury returned verdicts of guilty on both counts. Judge Lewis sentenced Herrera to 90-117 months in prison for the trafficking offense and an additional 6-17 months in prison to be served consecutively for the heroin possession offense. In June 2012, police found Herrera in a Charlotte park holding balloons of heroin in his hand. When officers searched Herrera’s vehicle, they found more balloons of heroin under a seat and in the door.

In all, police discovered 18 balloons of heroin, as well as $2,000, on Herrera and in
his vehicle.

Four defendants pled guilty before their cases were called for trial:

Eber Urias-Sanchez, 25, pled guilty to trafficking in heroin by possession. Judge Lewis sentenced him to 90-117 months in prison.

Antonio Reynoso-Martinez, 33, pled guilty to conspiracy to traffic in heroin by possession. Judge Lewis sentenced him to 70-84 months in prison.

Henry Coaxum, 24, pled guilty to 1) sale of cocaine, 2) delivery of cocaine and 3) possession with intent to sell or deliver cocaine. Judge Lewis sentenced Coaxum to 12-24 months in prison; that sentence was suspended pending his successful completion of 24 months of supervised probation.

Taquana Price, 23, pled guilty to conspiracy to sell cocaine. Price will be sentenced at a lat er date.