It sickens me to know that a 19 year old’s life was only worth five months of jail time in the eyes of the Mecklenburg County courts. Ryan Yoho (R) was killed by a drunk driver in October of 2004. The man responsible for the crash is 28 year old, Zepplin Hopper. Hopper was convicted of involuntary manslaughter and was sentenced to five months in jail. The maximum punishment for involuntary manslaughter in North Carolina is five years in prison.

In my opinion, if you choose to drive drunk- you should be prepared to suffer the consequences. If you KILL someone when you are driving impaired- you should be charged with murder! Hopper is responsible for Ryan Yoho’s death and he should be held responsible. 5 months in jail is nothing compared to the loss of someone’s son, brother and friend. Our legal system is a real bad joke! 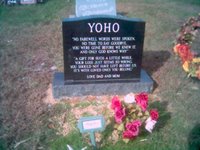 Furthermore, this was the second DWI for Hopper. He had a previous DWI charge in 2002 in Cumberland County- but it never went to court and was subsequently dropped. The charges were dismissed because the arresting officer had left the department, court records show. Is this what happens to charges when officers leave?? What is the point!?

After Yoho’s death, the Charlotte Observer reported on Hopper’s previous arrest in an investigative series that found prosecutors statewide dismiss one of every five DWI cases — more than 10,000 a year. The cases are tossed out, the investigation found, mostly because either police officers or the suspects don’t show up for court. Scary, isn’t it? Visit the Ryan Yoho Memorial Website