Drunk Woman Crashes Into River With Children In Car 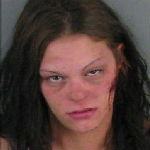 GASTON COUNTY, N.C. — State troopers arrested a Gastonia woman after she crashed her car into the South Fork River while her children were in the back seat.

Connie Jo Penland, 26, was impaired when she failed to stop at the “T” intersection at Lowell Spencer Mountain Road and Sutton Carpenter Road, according to troopers. The crash happened around 12:30 a.m. Saturday.

Penland’s children, 6 and 7, were in the back seat. Troopers said 8 inches of water were in the car when they first arrived.

According to troopers, Penland was so belligerent she thought she was in Kings Mountain, nearly 30 minutes away, and yelled at first responders.

All three occupants of the car were transported to the hospital. Penland had abrasions to her face, legs and arms.

The children have been turned over to their aunt. Both children were wearing seat belts at the time of the incident.

As of Saturday evening, Penland was being held in Gaston County Jail on $25,000 bond.