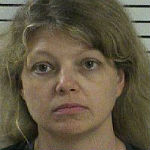 On April 18 the Sheriff’s Office received a report from a victim who said that she had found $4,975.58 missing from her bank account.  The victim said that she had given her debit card number to Ms. Sitler, an independent Mary Kay consultant, for the purpose of ordering Mary Kay products.

Upon further investigation, it was found that Sitler used the victim’s debit card number to make several fraudulent purchases from a company called Propay, a service similar to Paypal.  Based on information obtained from Propay, Sitler was arrested and charged accordingly.