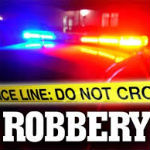 A Fort Mill man who has been arrested dozens of times for misdemeanors in the past 30-plus years is now in jail on a felony charge from allegedly trying to rob an armored car Wednesday at a Hardee’s restaurant, police and jail reports said.

50-year-old Donald Eugene “Donnie” Bolin is in prison on a $70,000 bond on a single count of attempted armed robbery. The target was an employee of the GardaWorld company who was trying to make a pickup at the Fort Mill Hardee’s Wednesday afternoon.

According to the worker, who was armed, Bolin was outside the restaurant and yelled “Hey!” in a “demanding tone,” the Fort Mill Police Department report states. When the worker turned to face the robber, Bolin had an umbrella in his hand. He then put his hand in his pocket and raised it like he had a gun, telling the worker to “Put your hands up and give me everything you have, and all of your money.”

According to the police report, the worker showed his service weapon and told Bolin to stop, but Bolin kept moving closer to the worker. The worker made his way into the truck and the police were called.

Bolin was arrested inside the Hardee’s restaurant when Fort Mill officers arrived.

Bolin was listed as homeless in March, but online records show he has given police several addresses in recent years.

State Law Enforcement Division records show a criminal record for Bolin dating from 1981, including a month in jail through early October after an arrest for public disorderly conduct, according to online jail records. Bolin was arrested at least four times in Fort Mill in 2013 and many more times in preceding years, SLED and online records show, on charges that include trespassing, breach of peace and public disorderly conduct.

This had been followed by at least five arrests in 2014, including convictions for public disorderly conduct and entering a premises illegally after a warning, records show.

Records show Bolin was sentenced to jail time in each case.