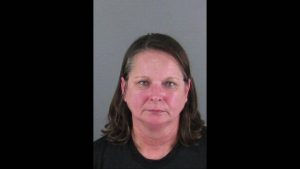 A Fort Mill officer has been fired from her possession after being charged with drug charges and DWI.

55-year-old Tanya Moore Ervin-Leonhardt was arrested on June 2 after Cherryville police were called to a location near the intersection of Main Street and Rudisill Street.  Officers arrived on the scene of an apparent careless driving incident and found Ervin-Leonhardt on the scene. She told police that she was an off-duty officer.

Police suspected inebriation, but Ervin-Leonhardt refused to take a sobriety test. She was then arrested.

A search of her vehicle turned up 12 grams of marijuana as well as drug paraphernalia. She also had her gun on her at the time of the incident, which in itself is not unusual, but paired with improper concealment while under the influence, earned her an extra felony charge of illegal carry of a firearm.

In addition, Ervin-Leonhardt was charged with driving while impaired, possession of marijuana, possession of drug paraphernalia, reckless driving, and open container.

On the day after her arrest, Fort Mill police saw enough probable cause to fire her from her position, saying that their officers are held to a higher standard and this sort of behavior would not be tolerated.

Ervin-Leonhardt had served since 2002, first as a patrol officer and then as the department’s desk officer.