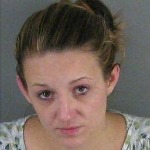 Police said Era Frazier left the kids inside the car while she went to the store.

Officials said the windows were rolled up and it was 85 degrees outside when they found the children.

Police said the incident happened at a store off East Long Avenue in Gastonia.