Gastonia Man Charged With Going Armed To The Terror 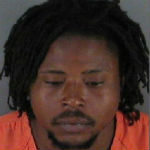 GASTONIA, N.C. – A man faces charges after he ran in the middle of Garrison Boulevard in Gastonia, and in a parking lot, waving a revolver on Friday, according to arrest warrants.

Antonio Jerome Craig, 29, faces charges of going armed to terrorize people and possession of a firearm by a felon.

He was reportedly running from officers and waving the revolver in the area of West Garrison Boulevard and South Street.

Police accuse him of waving the revolver in a parking lot, causing several people to scream and duck behind cars. They were afraid of being shot, according to a warrant affidavit.

Craig was convicted of felony drug possession in Gaston County in November 2005, and sentenced to two years probation.