Gunman On The Run After Domestic Violence Leaves 1 Dead, 1 Injured 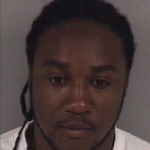 ROWAN COUNTY, N.C. — Officials are searching for a man they said shot two females, killing one of them, Saturday night in Rowan County.

Deputies were dispatched to Richfield Road for a reported home invasion and shots fired at 9:50 p.m.

An initial report said that a black female had been kidnapped from the residence.

When deputies arrived they found two people had been shot — a 17-year-old girl and a 54-year-old woman.

Deputies said they also located the black female who was reported kidnapped and she had not been harmed.

Investigators said the shooting was a result of an ongoing domestic situation between an estranged husband and wife.  The woman who was first thought to be kidnapped, Julia Moody, had taken out a restraining order against her husband, who is identified as Montannez Antonio Moody, 33.

Deputies said the husband and wife were scheduled to appear in court on Monday regarding the domestic violence order.

After investigating the scene, deputies said Montannez Moody busted a window on a door at the home and opened fire.

The teen, Jennifer Merriman, and the 54-year-old woman, Bernice Merriman, were both hit by rounds. Montannez Moody fled the scene.

Jennifer Merriman was identified to be the sister of Julia Moody. Bernice Merriman is their aunt.

Jennifer Merriman died as a result of the shooting and Bernice Merriman is undergoing treatment, but is expected to survive.

Julia Moody took refuge in a closet inside the home with her two infant sons. She and the children were unharmed in the shooting, deputies said.

Rowan County deputies have taken out warrants for arrest on Montannez Moody for first-degree murder, attempted murder, first-degree burglary and violation of a 50B domestic violence order.

Moody is believed to be driving a silver 2006 Infinity M35 with license plate tag number CDX-6051. The vehicle also has a tag on the front that says “U DIG.”

Moody is considered armed and dangerous.

Anyone that sees him or comes in contact with him is urged to call 911 immediately.