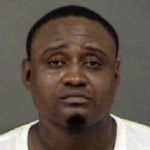 CHARLOTTE, N.C. — Troopers arrested a man they say led them on a chase at speeds up to 100 mph in northwest Charlotte late Thursday.

They said Anton’e Sloan, 32, sped away from a Highway Patrol car that tried to stop him on Interstate 85 northbound near the Brookshire Freeway. They said he exited onto Interstate 77 and then turned onto LaSalle Street, where he struck a van and kept going.

Troopers said Sloan stopped in a neighborhood, jumped from the vehicle and ran. He was taken into custody a short time later.

Sloan is facing 12 charges, including felony speeding to elude arrest, hit and run leaving the scene of property damage and reckless driving.

Troopers said no one was injured, and Sloan’s girlfriend was also arrested for obstruction of justice at the scene.