Essentially all home security systems work on the basic concept of securing various entryways and access points throughout your house. They also work to protect your home’s valuables such as electronics, monetary collections, art, and other items that would be considered valuable. To get a true sense of security you must deploy safety measures throughout your home that is monitored by a centralized control panel.

Security System, what is that?

The most basic method to explain a security system is to look at the phrase itself. It is a method in which something is secured through a system of constituents positioned around a home.

In this particular post, we are giving reference to home security systems which are a “system” of integrated electronic devices that work as a whole to protect against intruders or potential home invasions.

Typically a home security system would include: 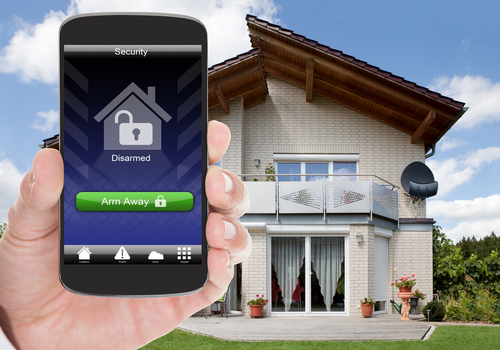 How exactly does a home security system work?

By way of utilizing sensors in entry points of the home that communicate with a central control panel that is installed or placed in a advantageous area in the home.

Sensors are typically placed in common entry points such as doors and windows. Emphasis would be on windows and doors that are easy accessible from the outside. Wide open spaces within the home or property may be fitted with motion sensors for added security.

Control Panel: The control panel acts as a computer and regulates the operations between all components in the home security system. When security is breached, it sounds the alarm and gets into contact with the company contracted to monitor the alarm.

A touchpad is the typical feature installed on the control panel where a personal pass code is entered and allows for the customer to arm or disarm the home security system.

Window and Door Sensors: Comprised of two parts installed neighboring each other. One component is installed on the door or window and the other on the window sill or frame of the door. When the two are installed in conjunction they act as a security system or full circuit. The sensors also communicate directly with the control panel and report to each other to make sure each entry point is secured.

When the security circuit is broken, by way of intruder or outside force, the sensor alerts the security panel and the incident is treated as a breach of a secured zone. In most cases the high decibel alarm will fire off and the company in charge of security monitoring is immediately notified.

Cameras: There are two distinct configurations for surveillance cameras: wired and wireless. Each are used in very distinct ways and are key components in developing an overall safe home security system.

Cameras for surveillance can typically be used across a range of devices. Most are accessible from smartphones, tablets, and desktop computers. They are used in a variety of ways, and not always by way of catching an intruder. Some families use it to monitor package delivery or even the arrival of their kids. They most beneficial factor in camera monitoring is the ability to record and save video footage.

Advantages of a home security system

Homes without a home security system are 3 times as likely to be robbed or taken advantage of because of the lessened security of the home.