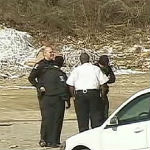 CHARLOTTE, N.C. — Charlotte-Mecklenburg police were on the scene of a death investigation in northwest Charlotte Thursday morning.

Homicide detectives responded to the Caraustar recycling plant on Chamberlain Avenue off of Rozzelles Ferry Road just after 11 a.m. Police said someone found a man’s body near the business and called 911.

The Medical Examiner’s office also responded and will be determining the cause of death.