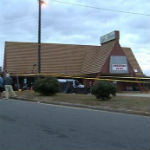 CHARLOTTE, N.C. — One man is dead after being shot in Charlotte early Saturday morning.

The Charlotte-Mecklenburg Police Department is investigating the shooting, which happened around 2:45 a.m. near the 1200 block of Lucky Penny Street in northwest Charlotte.

Detectives said Jones voluntarily went to CMPD headquarters for an interview about the shooting. After the interview Jones was charged.

According to police Covington and Jones did know each other. They said the shooting was not a random act of violence.