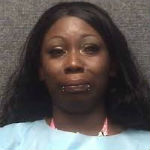 MYRTLE BEACH, S.C. – A North Carolina woman was arrested and charged with indecent exposure related charges after wearing a swimsuit in public, according to a statement released by South Carolina police.

Myrtle Beach police charged the woman with indecent exposure after officers warned her not to wear a thong swimsuit along Ocean Boulevard, according to the arrest report.

Tiara Monique Garness, 22, of High Point, North Carolina, was arrested at 5:00 am Friday in the 1700 block of Ocean Boulevard, the report saidOfficers charged her with the misdemeanor offense after being warned twice by police officers to properly cover herself.

Garness was taken to jail in Myrtle Beach, and was held on $469 bail, according to jail records.

A ban on thong bathing suits has been in place in Myrtle Beach for 2o years.

She was not the only woman arrested for wearing a swimsuit over the weekend.
Latosha Faye Collins, 27, of Dalton, Georgia was arrested at 7:20 pm at 199 8th Ave North Ocean Boulevard.  The police report said Collins was wearing her very small bathing suit while riding on the back of a motorcycle.

Tenisha Blair, 34, from Shelby, North Carolina was also arrested on 199 8th Ave North Ocean Blvd in Myrtle Beach, around 9:45 pm on Friday night.  The police report stated that she was walking on a sidewalk in a black dress with nothing underneath.