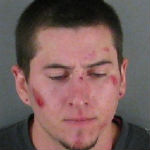 GASTONIA, N.C. – Police arrested a man on several charges Sunday morning in downtown Gastonia after he was observed being intoxicated and disruptive in public.

John Spencer Lewis, 22, faces charges of communicating threats, being intoxicated and disruptive, resisting a public officer and malicious conduct by a prisoner.

Lewis was at 141 W. Main Ave. when he began shouting and cursing at another man, then threatened he was going to get a gun and shoot him, according to arrest warrants and affidavits.

When Gastonia Police Officer J.L. Schrock attempted to restrain him, Lewis turned away and resisted being handcuffed, before spitting at Schrock, according to warrants.