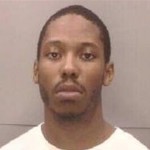 A Richland County jail officer is being charged with killing his pregnant girlfriend and then setting her body on fire. According to police twenty three year old Tristan Gist was arrested Monday and charged with murder and death of a child in utero.

The victim has been tentatively identified as twenty two year old Dierra Fisher. Coroners are waiting on confirmation from the medical records until the identity is confirmed.

Police say the victim was 21 weeks pregnant when Gist shot her in the head at their home around 3am last Thursday. Gist then drove her body to a wooded area and set it on fire.

Police also say that Gist had Fisher’s two and three year old children with him when he drove her dead body to the wooded area.