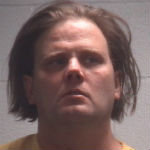 The police were called on a home on Phenix Street around 1:19 p.m. Saturday. After arriving, police found a man inside the home that refused to cooperate when officers asked to check on Donald Howard Lovette, 68.

Officers finally got into the home and found Donald Lovette dead.

Robert Henry Lovette, 38, was arrested and charged with first-degree murder. He is being held at Cleveland County Law Enforcement Center with no bond at this time.